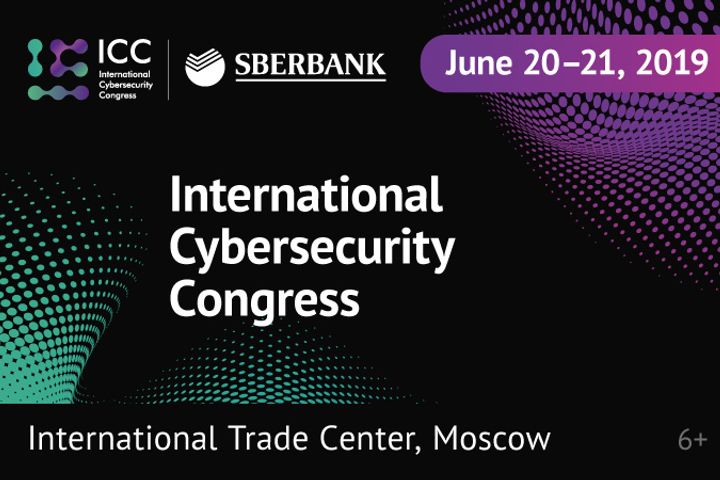 The Second International Congress on Cyber Security (ICC) organized by Sberbank with the support of the Association of Banks of Russia and ANO Digital Economy was held in the World Trade Centreon June 20-21. The Rosсongress Foundation acted as the Congress operator.

Speeches at the ICC sessions were delivered by Omer Fatih Sayan, Deputy Minister, Ministry of Transport and Infrastructure of the Republic of Turkey, Jürgen Storbeck, first Director of Europol, Hans-Wilhelm Dunn, President of Cyber-Security Council, Germany, Craig Jones, Cybercrime Director, Interpol and others.

Konstantin Noskov, Minister of Digital Development, Communications and Mass Media of the Russian Federation, participated in the opening plenary sessionThe Road to Cyber Resilience — A Walk Together?. Misha Glenny — investigative reporter and leading expert on cybercrime, moderated the session.

The first ICC, held in Moscow in 2018, was attended by representatives from 50 countries. This confirms that a growing number of international experts, world business leaders and government representatives consider the Congress an important platform for an open international dialogue on cybersecurity issues.

Dmitry Medvedev, Prime Minister of the Russian Federation, attended the Congress on its second day, June 21, when he personally addressed the participants at the plenary session Secure Digital World — Future or Utopia? which became the key event of the Congress.

The plenary session summed up the results of joint work, discussed development prospects in the era of global digitalisation and identified strategies for increasing general resilience to major cyber threats.

Herman Gref, CEO, Chairman of the Executive Board, Sberbank:

"The deeperyou plunge into the problem of cybersecurity, the worse you sleep. These things are absolutely interdependent: when a leader starts to understand how difficult it is to protect all elements of modern digital systems, he comes to realization that this not only requires a very strong team, but also a very high level of cooperation with the international community. We have come to the following firm conclusion: we feel vulnerable and scared of the future because we see that it is impossible to overcome global cybercrime single-handedly. Cybersecurity risks are growing exponentially, and I will feel much better if I know that a broad coalition is established for fighting against hackers."

In the framework of the International Cybersecurity Congress the participants discussed such important topics as ensuring global cyber resilience, countering the major cyber threats of today, breakthrough technologies, cybersecurity strategies for various areas of application and cybercrime investigation.

At almost every session the participants spoke about trust and the need to work together to ensure security in the digital world. The importance of this issue was proved by the results of the Cyber Polygon, online training on cybercrime counteraction held on June 19: upon connecting to the data exchange platform by BI.ZONE, the teams’ efficiency increased more than 7 times, that is, the collaboration allows faster and better protection against cyberthreats.

As regards the practical results of the Congress, the following is worth noting: Sberbank’s subsidiary company BI.ZONE announced the beginning of the battle against cybercrime in Qatar together with the MANNAI Corporation and the introduction of an integrated platform for providing cybersecurity services in Kazakhstan jointly with Transtelecom JSC. Additionally, a memorandum of understanding was signed with Astana International Financial Centre. Such interaction is of paramount importance in the fight against cyberthreats.

As noted by Stanislav Kuznetsov, Deputy Chairman of the Executive Board of Sberbank: "Cybercrime today transcends all boundaries. You can attack any resources from anywhere in the world. And vice versa, national borders prevent us from cooperating and exchanging significant information that may help in the war against cybercrime."

Within two years, the International Cybersecurity Congress (ICC) established itself as an important specialized event and, according to its organizers, in 2020 the Congress will gather even more participants ready to discuss, share experience and solve the most pressing and complex problems in the field of cybersecurity.

The second ICC is a key event of the Global Cyber Week, an international week oncybersecurity that took place in Moscow on June 17–21. It became the largest industryevent in Russia and Eastern Europe.The Congress served as an umbrella for a number of sectoral forums attended by representatives ofRussian and foreign state institutions, international organisations and companies, as wellas independent experts and researchers.

Global Cyber Week began with the technical conference on practical cybersecurity OFFZONE, which was held on June 17-18. On June 19, Cyber Polygon was arranged, an online trainingsession on international business cooperation in fighting against digital threats. The guests could follow the participants’ progress online in real-time mode.

The first ICC was held in Moscow on July 5-6, 2018 The Congress brought together more than 2500 participants and about 700 organisations from more than 50 countries.President of the Russian Federation V.V.Putin welcomed the guests with a personal opening address.