BI.ZONE makes a projection of the future of cybersecurity at the World Economic Forum in Davos

The World Economic Forum (WEF) was held in January 22-25, where Dmitry Samartsev, CEO at BI.ZONE, co-moderated a working discussion on cybersecurity named “Private corporations vs cybercrime: success through collaboration”, following with an in-depth look at issues and challenges of digitalization.

Being one of the main line-ups at the event, the working discussion “Private corporations vs cybercrime: success through collaboration” was held at the 49th annual WEF session on the 23rd of January and hosted by Stanislav Kuznetsov, Deputy Chairman of the Executive Board of Sberbank and Dmitry Samartsev, CEO of BI.ZONE. The participants discussed current prevalent challenges of the digital sphere and put forth schemes for international cooperation in the fight against cyberthreats.

Stanislav Kuznetsov, Deputy Chairman of the Executive Board of Sberbank

Cybercrime makes the shortlist of key global risks — according to WEF — potentially costing the global community $8 trillion by 2022. The participants of this discussion have reached a consensus in that in order to successfully combat such crimes, an effective international collaboration is paramount, on state level as well as in the daily grind of private corporations. The core of this collaboration may be, of many things — trusted platforms for regular exchange of data on cyberthreats. For it is the sharing of information and continuous liaison between the state and business that has the potential to provide effective capabilities in countering cybercriminals.

On a side note, the participants of the meetup touched on the operations of the Centre for Cybersecurity — C4C — founded by WEF, and solemnly presented at the 2018 session in Davos.

The working discussion was attended by members of the WEF’s Centre for Cybersecurity, along with a myriad international companies and organization, of whom were Mastercard, Bank of America, KPMG, Siemens, Microsoft, Avaada Group, Cloudflare, Vostok and many others.

The dialogue about possible vectors for cybersecurity development within the scope of the WEF continued into January 24th during a panel discussion on Futureproofing Cybersecurity, which was also attended by BI.ZONE’s Chief Executive Director, Dmitry Samartsev. The main focus of the discussion was the evident lack of mechanisms of information exchange, on a national level, between industries as well as on a global scale. A trusted and user-friendly system for sharing information across nations is thought to smoothen and adapt the plethora of experiences, expertise and assets of potential users, all to establish a united front against cyberthreats. 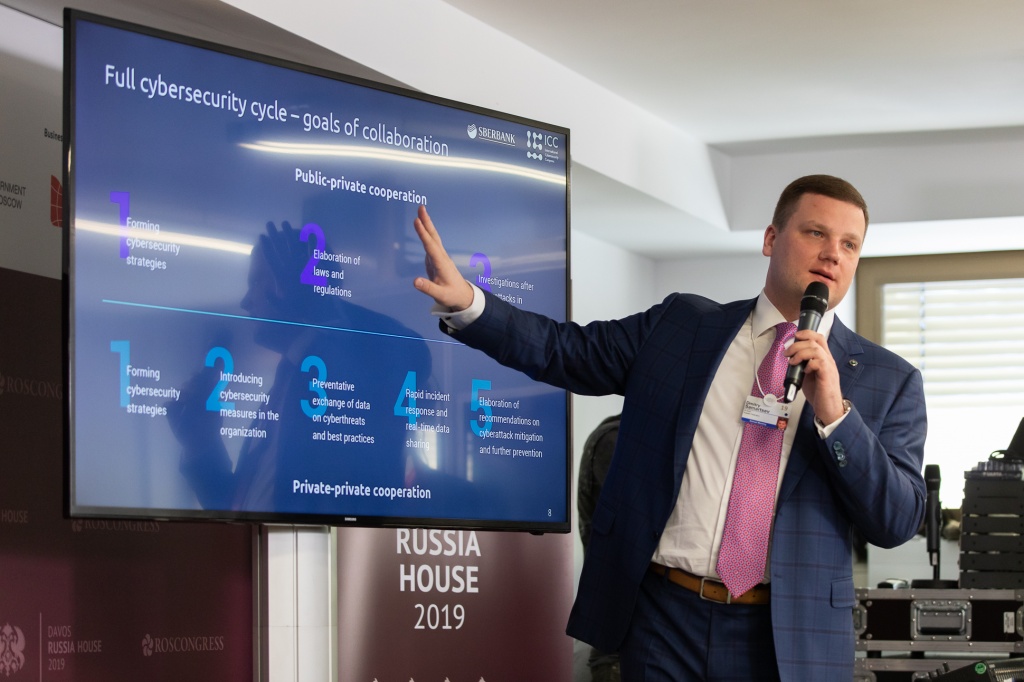 The turnout of speakers spoke volumes for the importance of the problem: apart from the representative from BI.ZONE, the floor was shared among Troels Oerting Jorgensen, Head of the WEF’s Centre for Cybersecurity; Kelly Bissell, Senior Managing Director at Accenture; Michelle Zatlyn, Chief Operating Officer and Co-Founder of Cloudfare Inc.

BI.ZONE has always been at the forefront when it comes to supporting multifaceted interaction between companies, industries and states to protect themselves against cybercrime. The scheme for intelligence sharing, presented as a solution at the WEF, has already proven itself within the joint project between BI.ZONE and the Association of Banks of Russia. The more pertinent of trends and solutions to cyberthreats are to be discussed at length during the next International Cybersecurity Congress — ICC, which is due to take place on the 20th and 21st of June 2019, at the Global Cyber Week. In addition to the ICC, the Global Cyber Week is planned to host the international tech-conference on practical cybersecurity — OFFZONE 2019; and Cyber Polygon — the global online training exercise for cyber-risks management.

The ICC is an international and cross-industry platform for facilitating a dialogue between representatives of state authorities, world business leaders and renowned experts all tackling the more pressing issues of protection against cyberthreats in the age of global digital transformation. The first ever international congress on cybersecurity took place June 2018. It managed to unite more than 2200 participants — representatives of 700 companies from 50 countries. The ICC 2018 could not have happened without the invaluable input from many dear contributors amongst whom was the President of the Russian Federation, Vladimir Putin.